SYDNEY: Cardinal George Pell — a giant of the Catholic Church who was convicted and later cleared of sexual abuse in Australia — has died in Rome aged 81, a church official confirmed Wednesday.
From humble beginnings in regional Australia, Pell climbed the ranks to become one of Pope Francis’s most trusted advisers inside the Vatican.
But his meteoric rise was tainted by criminal convictions — later quashed — for molesting two Australian choir boys in the 1990s while he was the Archbishop of Melbourne.
“It is with deep sadness that I can confirm His Eminence, Cardinal George Pell, passed away in Rome in the early hours of this morning,” Australian Archbishop Anthony Fisher said in a statement provided to AFP.
“This news comes as a great shock to all of us.”
While Church figures praised Pell’s legacy, Australian lawyers confirmed on Wednesday they would plough ahead with a civil case that listed him as a co-defendant.
The case had been brought by the father of a former altar boy who alleged he was sexually abused by Pell.
“The claim will continue against the church and whatever estate Pell has left behind,” Shine Lawyers said in a statement.
Pell died of complications related to a hip surgery he had undergone in a Rome hospital on Tuesday, according to the Vatican’s official news website.
Before he was imprisoned in Australia, Pell was widely seen as the right-hand man of Pope Francis and the third most powerful figure in the church.
Australian Prime Minister Anthony Albanese, who describes himself as a non-practising Catholic, extended his condolences “to all those who will be mourning”.
In 2014, Pell was tasked with rooting out church corruption as the head of the Secretariat for the Economy.
He voluntarily returned to Australia in 2017 to face charges of sexual abuse, which he strenuously denied until his death.
The first trial ended in a hung jury, but a second trial found Pell guilty of sexually abusing two 13-year-old choirboys.
In 2019, he was sentenced to six years in prison and registered as a sex offender.
He spent 12 months in Barwon Prison near Melbourne before the Australian High Court quashed his convictions following an appeal — opening the door for his return to Rome in late 2020.
Pell was embraced by the church despite the scandal and was received by the Pope inside the Apostolic Palace in October 2020.
He was among those in attendance at the funeral of Pope Benedict XVI at St Peter’s Square last week.
Archbishop of Perth Timothy Costelloe said Pell’s “many strengths were widely recognised” and his impact on the Church would “continue to be felt for many years”.
Although cleared by the courts, a separate government inquiry criticised Pell’s apparent indifference to sexual abuse claims as he rose to prominence in Australia’s Catholic Church.
“By 1973, Cardinal Pell was not only conscious of child sexual abuse by clergy but that he also had considered measures of avoiding situations which might provoke gossip about it,” a Royal Commission concluded in 2020.
Born in the regional town of Ballarat in the state of Victoria, Pell climbed higher in the Catholic Church than any other Australian before him.
Archbishop of Melbourne Peter Comensoli on Wednesday said Pell was a “very significant and influential church leader, both in Australia and internationally”.
Former conservative Australian prime minister Tony Abbott previously called Pell “one of the greatest churchmen that Australia has seen”

‘Fierce’ battle in Ukraine for Vugledar near Donetsk 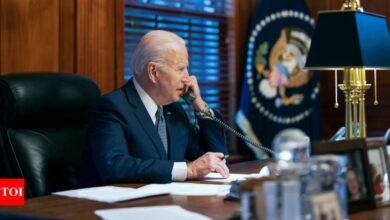