Yeh Rishta Kya Kehlata Hai has taken a very interesting twist now. Abhimanyu and Akshara who were separated a couple of days ago have finally come face to face with each other. AbhiRa fans are happy and emotional. They are especially bowled over by the performances of Harshad Chopda and Pranali Rathod who play Abhimanyu and Akshara in the long-running series. The online audience who have watched tonight’s episode of Yeh Rishta Kya Kehlata Hai is in awe on how well the meeting has turned out to be. Also Read – Ghum Hai Kisikey Pyaar Meiin star Ayesha Singh, Anupamaa aka Rupali Ganguly and more TV actresses who are queens of emotional scenes [View Pics]

Entertainment News have been full of updates on Yeh Rishta Kya Kehlata Hai. The show took a leap of six years before which Abhimanyu (Harshad Chopda) and Akshara (Pranali Rathod) had a nasty separation. Abhimanyu blamed Akshara for Neil and their kids’ death and signed divorce papers. Akshara, heartbroken signed the papers as well and left Abhimanyu. She later learned that one of her kids in the womb is alive. And now, after so many days, AbhiRa has come face-to-face. Abhimanyu and Akshara are in shock and very bitter about the past. However, they still meet although strangers. Akshara curses her fate while Abhimanyu lets his tears flow upon seeing Akshara. They also exchange some taunts. Also Read – Anupamaa MAJOR TWIST: Vanraj feels like a complete loser as he has to sell Baa’s gold; Anu-Anuj spend quality time

The initial shock and awkwardness are very well-emoted by Harshad Chopda and Pranali Rathod. The bitterness in them over their past is also well portrayed. Fans are bowled over by the performances of Harshad and Pranali in the upcoming episode of Yeh Rishta Kya Kehlata Hai. They cannot stop gushing about it on Twitter. Check out the tweets here: Also Read – Ghum Hai Kisikey Pyaar Meiin to Anupamaa; Top TV shows where mystery child track kept the TRPs soaring

The 1st mere moments both were filled with yearning,miss then their hurt & anger take over

Abhi lone tear showed guilt on his loss,looking at her then to the home to nav & abhir
Regret on the things slipped from his hands
If you are blind to feels I can’t help it #yrkkh #abhira

We knew it since the beginning why Nav was brought into the picture. Why those frames were placed there? & we still know that Nav isn’t going to be there for longer time.His role is to reunite #ABHIRA. But damn #Harshali’s acting makes it difficult ?? More DDP OTW. #Yrkkh

Not them checking out Each other while being in pain ?♥️

Have no stomach to watch?

Cudn’t resist few clips though. Of what i saw, @ChopdaHarshad has outdone himself yet again!
Un-effing-believable this man!

A wonderful episode. My leads can act! The way #PranaliRathod #HarshadChopda can emote, deliver dialogues, expressions completely made it a worthwhile watch.
What a find #Harshali are. The best leads. Them in angsty scenes is just ??

Nahh today’s epi is completely owned by them?❤️Both nailed it with their expressions??❤️?#Abhira #harshali #yrkkh pic.twitter.com/3p5hBMUgcr

Ahhh, such a painfully beautiful epi, way better than I imagined ❤️‍??#Harshali were freaking outstanding in portraying the emotions.

Those stars, the fbs. The fact that Abhir loves stars like his parents used to ?❤
The execution of the eps post leap >> #Yrkkh #AbhiRapic.twitter.com/m8BQy8apt2#yrkkh

those fbs when akshu wore nose pin for the first time and abhi decked up in suits ? this scenes beauty elevated 10x more with these fbs ???#abhira • #yrkkhpic.twitter.com/jUUtHdUDlM

The next episode of Yeh Rishta Kya Kehlata Hai will see Abhimanyu, Akshara, Abhinav and Abhir having dinner together. Akshara serves food and Abhimanyu has a bite which makes him relieve his past. Abhinav praises Akshara’s cooking and Abhimanyu lets slip that he has had it before. Akshara looks in shock while Abhinav is surprised. Malaika Arora did a bo*ld photoshoot by opening the blazer buttons at the age of 49; Bralette such that eyes will not go away 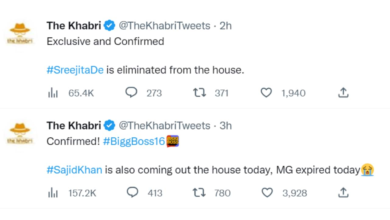 Double eliminations this week? Not just Sajid Khan, Sreejita De too is out of Salman Khan’s show? 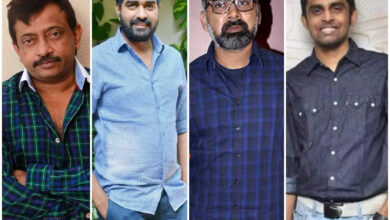 Esha Gupta crossed all limits of bo*ldness, wearing a dress cut from the edge had blown everyone’s senses