SANTA CRUZ: Laurie Morse shovelled wet sand into bags in the pouring rain Wednesday, preparing to stack them along her garage in a last ditch effort to keep out a rising creek on California’s central coast, as the storm-ravaged state braced for another round of lashing rains and damaging winds.
Morse’s roof was leaking, and along with her neighbours near Santa Cruz, she’s spent every day of 2023 trying to figure out how to keep her house dry after an unrelenting onslaught of violent weather caused widespread damage over the past two weeks. Cars were submerged, trees uprooted and roofs blown off homes.
While the rain eased in many areas, thunderstorms led yet another atmospheric river into the northern half of the state and forecasters said the latest system would be followed by more storms this weekend and next week. From the San Francisco Bay Area down to Los Angeles, Californians had little time to rest between assessing damage from the last storm and preparing for the next.
Earlier this week, Morse and her fellow residents of tiny Rio Del Mar were ordered to evacuate as hillsides collapsed and massive logs and stumps tumbled down the bloated Aptos Creek from the Santa Cruz mountains into the Monterey Bay.
Now they were scrambling to clean up while simultaneously stacking sandbags and hoping for the best as the rain got heavier.
“It’s one step forward and two steps back right now,” said Morse, 59, a disabled Army veteran. “There’s so much damage already.”
The plume of moisture lurking off the northern coast stretched all the way over the Pacific to Hawaii, making the atmospheric river “a true Pineapple Express,” the National Weather Service said.
Michael Anderson, climatologist with the Department of Water Resources, said California has been hit by seven storms since the end of December and two more slightly weaker ones were expected before the state gets a reprieve by the end of next week.
“The challenge is they’re storms eight and nine in the sequence and the cumulative effect is likely to cause impacts larger than the storms themselves might cause,” Anderson said.
At least 18 people have died in the storms battering the state. The figure is likely to rise, Gov. Gavin Newsom said Tuesday during a visit to the scenic town of Capitola, just up the Santa Cruz coast from Rio Del Mar, that was hard hit by flooding creek waters. Raging surf destroyed an iconic pier.
A 43-year-old woman was found dead Wednesday in her submerged car a day after calling 911 to say the vehicle was stuck in floodwaters north of San Francisco, according to the Sonoma County Sheriff’s Office. When the search resumed at sunrise, divers discovered the car under about 10 feet (3 metres) of water off a rural road near Forestville, the department said.
More than half of California’s 58 counties were declared disaster areas and repairing the damage may cost more than USD 1 billion, according to Brian Ferguson, spokesperson for the state Office of Emergency Services.
Crews worked to reopen major highways that were closed by rockslides, swamped by flooding or smothered with mud while more than 10,000 people who were ordered out of seaside towns on the central coast were allowed to return home.
That included Montecito, a wealthy Santa Barbara County community that is home to Prince Harry and other celebrities where 23 people died and more than 100 homes were destroyed in a mudslide five years ago.
This week’s storm brought back harrowing memories for Montecito resident Susanne Tobey, who was rescued when the 2018 mudslide roared through her community.
Like five years ago, when the community was asked to evacuate on Monday, the only highway out was closed, she said. “It was terrifying,” she said of the latest storm. “I don’t think I slept the whole night and the rain was … you just can’t imagine. It’s like just living in a waterfall.” But even with yet another storm on its way, Tobey said she plans to stay put again.
She said the community has made improvements that she hopes will prevent a similar tragedy, including adding steel nets to catch falling boulders, and debris basins to catch the deluge before it overtakes the hillsides that plunge into the Pacific Ocean.
“You have to be brave to live in California,” she said, adding: “I can’t imagine living anywhere else.”
High in the Eastern Sierra, California Department of Transportation snowplows were running around the clock to fully reopen US 395, which at one time was blocked by 75 miles (121 kilometres) of snow, ice and rocks. The Palisades Tahoe ski resort reported that it had received 300 inches (7.6 metres) of snowfall so far this season.
Despite the precipitation, most of the state remained in extreme or severe drought, according to the US Drought Monitor.
Mudslides damaged some homes in pricey Los Angeles hillside areas, while further up the coast a sinkhole damaged 15 homes in the rural community of Orcutt.
Kevin Costner, best-actor winner in a television drama series for “Yellowstone,” was unable to attend Tuesday’s Golden Globe awards in LA because of the weather. Presenter Regina Hall said he was sheltering in place in Santa Barbara due to flooding.
In San Francisco, a tree fell on a commuter bus on Tuesday without causing injuries and lightning struck the city’s iconic Transamerica Pyramid building without damage. In South San Francisco, high winds also ripped away part of the roof on a large apartment building.
Crews wielding chainsaws were working around the clock to clear all the downed trees across the Bay Area. Arborist Remy Hummer said he expected many more trees to fall as rains returned.
“The soil is basically like a sponge, and at some point he can’t hold any more water and trees become essentially almost buoyant in the soil and very loose. And then you get the combinations of high winds and that’s when you get tree failures, meaning full trees uprooting and falling over,” he said. 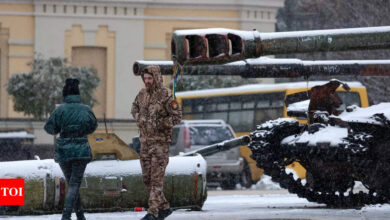 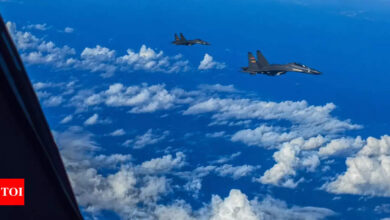 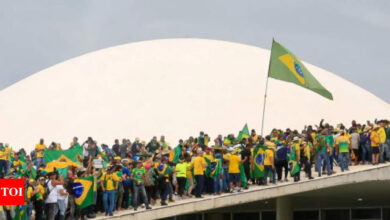 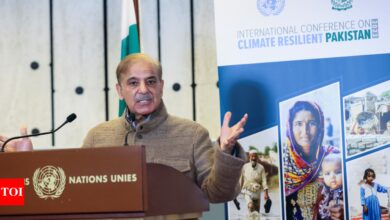