Ranbir Kapoor and Alia Bhatt never go off the headlines. The adorable couple remains constantly in news all for good reasons. Whenever they step both manage to grab attention. The duo attended an event in Mumbai on Thursday and attracted media as Ranbir teased Alia to sing a song but unfortunately she forgets the lyrics. Also Read – Alia Bhatt’s Heart Of Stone, Extraction 2, Your Place Or Mine; Check out Netflix release dates of new movies and series in 2023

The couple attended Mumbai Moments 2023 calendar launch event at Mumbai Press Club. during the media interaction, Ranbir asked Alia to sing a song for the media. She chose to sing the very famous track from her latest film Brahmastra. The actress picked Kesariya to sing in her soulful melodious voice. After singing a line she fails to complete the lyrics, at this point Ranbir Kapoor came in support of her gorgeous wife. Also Read – Ranbir Kapoor hilariously mocked over his ‘Jab main jawaan tha’ comment; netizens say, ‘he is gracefully accepting his age’

However, she didn’t stop and continued to sing and Ranbir Kapoor was seen cheering up throughout. The kind act of Ranbir supporting her wife won the internet. While netizens were in awe of Ranbir Kapoor’s support, a section of society trolled the actress for overacting. People called her out stating she pretended to forget the lyrics. The video of her singing Kesariya at the event viral and neitizens said she is trying way soooooooo hard to be funny asking Alia Bhatt to be herself. In the video Ranbir is seen whispering her ears as she sings, people assumed he must have said ‘jayada overacting mat kar.’ Also Read – Ranbir Kapoor-Alia Bhatt join Kareena Kapoor Khan, Saif Ali Khan and others for a fam jam; Navya Naveli Nanda is all smiles with Kapoor clan [View Pics]

The duo shared the screen for the first time in Ayan Mukerji’s Brahmastra. Last year the power couple managed to always be on top of news titles for professional and personal life. They tied the knot in a close affair and welcomed their first child Raha by end of the year 2022.

On the work front, Ranbir Kapoor will be next seen in Luv Ranjan’s rom-com Tu Jhoothi Main Makkaar alongside Shraddha Kapoor for the first time. In the pipeline, he also has Animal with Rashmika Mandanna. On the other hand, Alia is all set for the release of her Hollywood debut Heart of Stone with Gal Gadot. The spy action thriller film will release on Netflix on 11th August 2023. 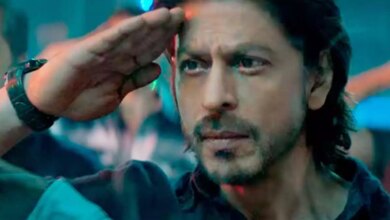